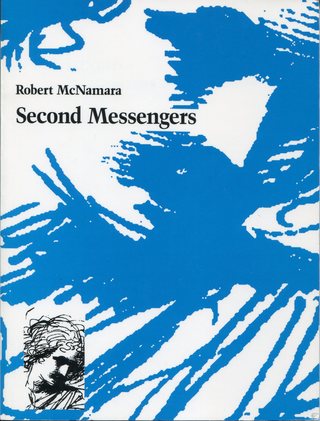 In this blue prolific light you squint
to see a child sitting by the stream, his shirt splayed
beside him in the grass. A bamboo pole catches the brown curve
of his shoulder and the green-laden tree.

This isolation pains you:
it is a pleasant afternoon.

And this dove, like the soul sprung from the mouth
at the moment of death, as it had passed mouth to mouth
in columbine kiss...

His right foot moves, and you feel the cool ripple over your instep,
the wake under your arch.
The dove’s eyes are yellow and shrewd.

You think the blackberries have never been so sweet!

Then it explodes, a little bluegill beating the air
like a wind-up toy, and the boy ripping the hook
from the gristly tissues of its mouth.

He listens, and you think of some saint
listening, in which painting you no longer remember, a dove
hovering at his ear as he sits at his writing table:
Gaude, Virgo, Mater Christi,
Quae per aurem concepisti.

For years after they covered the chemical fill with dirt
the ground would burn sometimes at night, a leapfrog
of lambent bluish flame. Coming through the cut
the boats would gather on the water, luffing their sails
in the twilight winds, the flutter and snap
lending the bickering flames a fierceness, a blue mystery
that held them, gazing, amazed.

His pole leans against the alder behind him, the hook
grazing his shoulder like a deer fly.

You begin to walk toward him, a killdeer running before you,
its wing splayed as though broken, and a dove

wiping its bill on a branch.